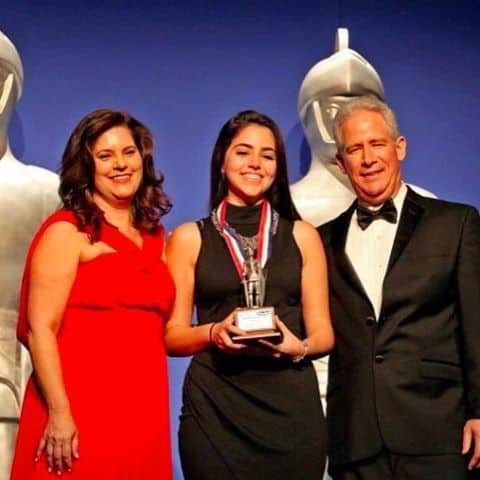 Maria Mejia being awarded the Silver Knight Award in Mathematics.

Two years ago, Maria Mejia attended the first Girls Who Code summer immersion program in Miami, where she invented a facial recognition security app. Since then, she started a Girls Who Code club at school, which has expanded each year. She jumped into robotics, and the team moved up in competition to win a 3D printer. Last summer, she won a scholarship for MIT’s program for minorities by working with underwater robotics.

Maria assists the programming director of CODeLLA with classes at Centro Mater after-care to teach the basics of HTML and CSS to Latinas ages 9‐12. To encourage even more girls to code, Maria helped create the event Code/ Art Miami, a digital art exhibition and coding competition for girls in grades 4-12, and helped create the Code/Art Scholarship fund for women studying Computer Animation or Gaming at MDC.

An AP Scholar, she was an intern with Venture Hive, a tech startup incubator. She won Gov. Rick Scott’s Young Entrepreneur Award and is a National Center for Women In Technology Award winner.