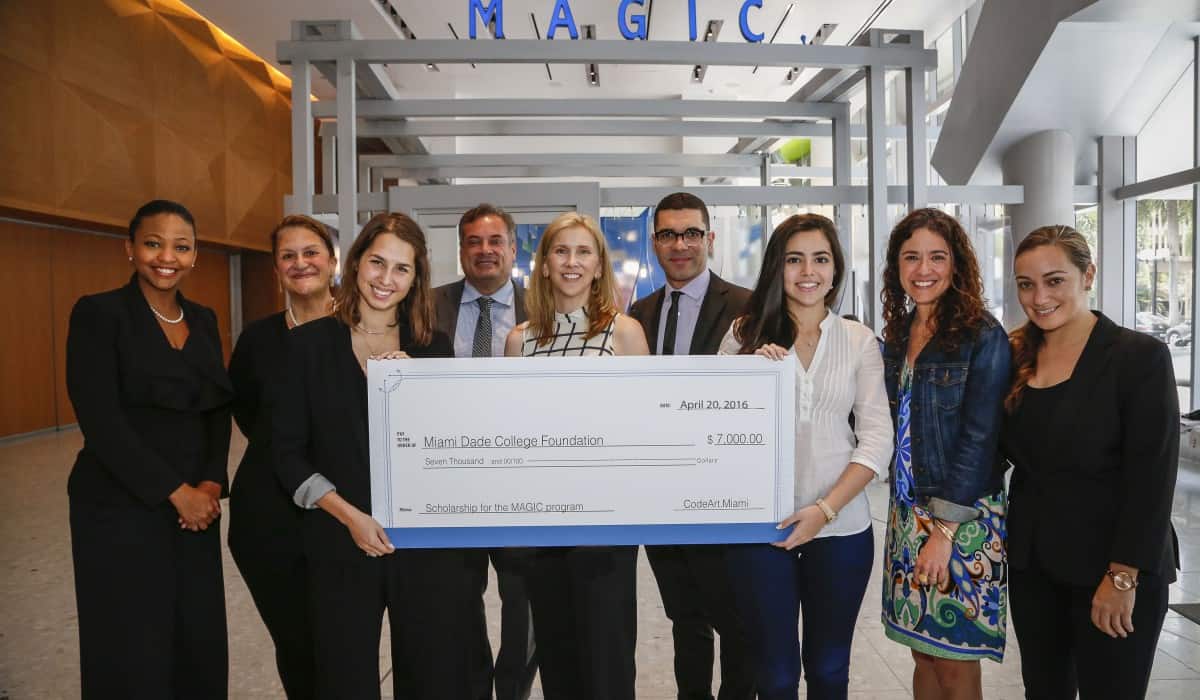 Miami Herald – By Amy Austin Renshaw – For the past two years I have had the privilege to be an instructor with the Girls Who Code Club at iPrep Academy. The club was founded last school year by then junior, Maria Mejia, who was inspired to get more girls into coding after completing the Girls Who Code summer immersion program. This year Maria wanted to do even more to inspire girls to learn to code, and from that was born the idea for Code/Art Miami, an event aimed at encouraging more girls to learn to code by highlighting the creative side of computer science through a student digital art exhibition and speaker symposium.

Volunteers from three local Girls Who Code Clubs (iPrep Academy, The Idea Center @ MDC, and Pinecrest Library) and CODeLLA, a local organization that teaches coding and tech skills to Latina girls, came together to plan the event, which was hosted in early February at the Miami Animation & Gaming International Complex (MAGIC) at MDC Wolfson Campus. The event was a great success with over 300 attendees and over 150 student submissions of art-generating programs that ran on digital flat screens throughout the event venue.

In addition to the event, Maria worked to establish the Code/Art Miami Scholarship fund at MDC to give back to our host and to make a positive impact on more lives. “A disadvantaged student should not be limited by finances in order to pursue an education, especially when the odds are already against her. Just as I have been fortunate enough to have an entire network of supportive friends and mentors, the Code/Art Miami scholarship is a way of providing those same resources to someone else,” said Maria.

“In setting up the scholarship, we were amazed to learn that just $7,000 would cover tuition costs for one student for both years in the two-year MAGIC program,” said iPrep math teacher and Girls Who Code Club advisor Lisa Hauser. Funds for the scholarship were raised at the event through a silent auction, which included donations from Miami Heat player Chris Bosh and artist Ahol, and through continued post-event sales of a limited-edition print donated by London-based artist Ryca. By early April, we reached our fundraising goal, and on April 20th, Maria and the rest of the Code/Art Miami planning committee presented MDC with a check for $7,000 to establish a scholarship fund for women or other underrepresented minorities enrolled in one of MAGIC’s two-year programs. “Currently only about one-fifth of gaming developers are women. This new scholarship will help encourage more women to enter this field,” said Mauricio Ferrazza, MAGIC Chairperson.

Volunteers who helped Maria make the event and the scholarship fund a reality include my event co-chair Josie Goytisolo and executive planning committee members Lander Basterra, Allison Cammack, Marina Ganopolsky, Sophia Garcia and Lisa Hauser, all of whom share a passion for education — particularly computer science eduction — and a belief in its ability to change lives. Speaking for the group, Allison said, “Coding teaches problem-solving, teamwork, and tenacity. Whatever you can dream, coding gives you the tools to build. And with imagination and determination, you can change the world.”

Work is already underway for next year’s event. We are reaching out now to area schools to schedule information sessions and workshops in the fall for both teachers and students in the hopes of involving more girls next year. In addition to including more students, we plan to add age brackets and categories for next year’s competition. “It was incredibly difficult to choose just three winners from this year’s submissions, which came from girls in grades 4-12 and included still images, 3D-printed art, animations, and interactive art programs,” said Head Judge Marina Ganopolsky. To learn more about Code/Art Miami or schedule an information session at your school or club, email amy@codeart.miami.